I recently switched back to iOS after a few years using Android. One aspect of Android that always bothered me was that I had trouble finding a great Podcasting app. I’d happily used Instacast on iOS, but I couldn’t find anything quite like it for Android.

I eventually settled on Podcast Addict. It epitomizes a stereotype of Android apps: tons of features, gajillions of options and a UI that was clearly designed by an engineer.

After switching back to iOS, I had a surprisingly hard time finding a Podcasting app which could do everything I wanted. For me, the hard requirements were:

In the last few years, Instacast received a major update. This introduced a new player interface which doesn’t work on the iOS lock screen. As a result, you can’t use the play/pause/volume features on your earbuds!

It also lacks the ability to sort podcasts by most-recently-updated. I subscribe to a mix of podcasts that update frequently and infrequently, so I find this to be a far more useful view than a complete list of all episodes. In particular, I don’t want an hourly podcast to crowd out less frequently updated shows.

So I set out to find a new Podcasting app. I really wish the iOS App Store had a try-before-you-buy option. Order-by-date is a fairly obscure feature, and it was impossible to determine if an app supported it without buying it.

Since I spent about $10 trying out apps and deleting them, here’s my guide to spare you that chore!

As I mentioned, it’s missing the order by most recently updated feature and the ability to control playback via the lock screen.

Overcast is the best looking of the bunch. I appreciate its freemium model and functional shoutouts to alternative apps—they made moving my list of feeds between apps painless.

That being said, I had a few problems with Overcast:

Podcasts is a barebones app for listening to Podcasts. I couldn’t tell if it supported streaming (I don’t think it does) and it definitely doesn’t support showing your podcasts ordered by when they were last updated. Next!

This app came up when I searched for Downcast on the App store and looked promising. Unfortunately, it hasn’t been updated for the new “flat” look in iOS 7 and it doesn’t support the larger screen on the iPhone 6. It also lacks the most-recently-updated view.

Finally I found Downcast, which meets all my Podcasting needs. It lets you order your podcasts by most-recently updated, though the option is tricky to find (Edit→Sort→Publication Date): 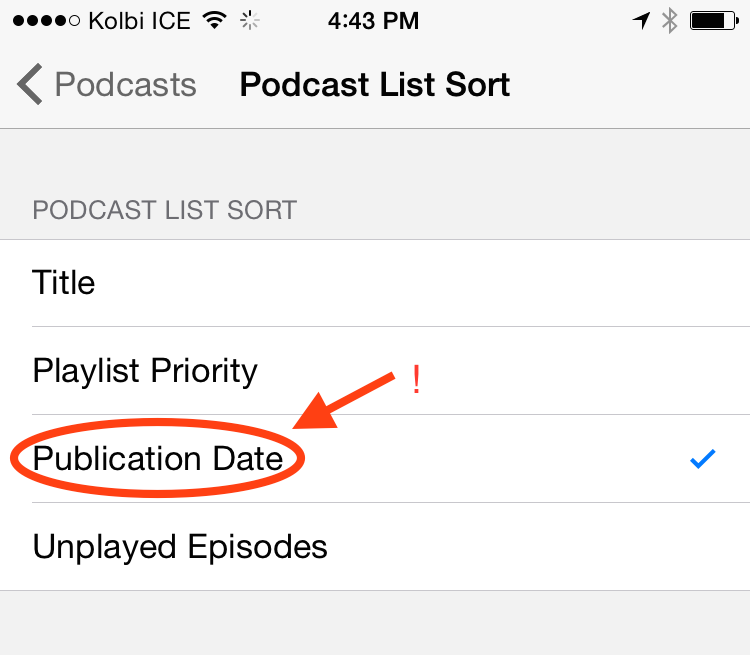 And there’s an option to disable play-through on the player screen, if you can recognize it:

Next on my list to try were Pocket Casts and Castro, but I stopped when I found that I was happy with Downcast.

After all this, I’m coming to appreciate that everyone has different ways of using their podcasting app, which makes designing them hard. I don’t care at all about Smart Playlists (which many apps emphasize) and I care about slightly obscure features like ordering my podcasts by when they were updated. This is a case of dangling by a trivial feature.